By MIRANDA ALDERSLEY FOR MAILONLINE and DAVID MARTOSKO, U.S. POLITICAL EDITOR FOR DAILYMAIL.COM and WIRES 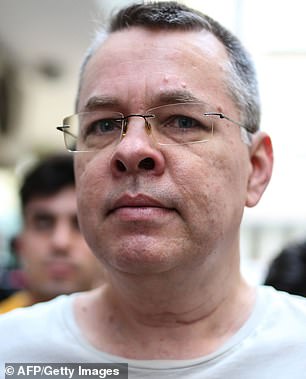 The trial of pastor Andrew Craig Brunson (pictured), which has huge implications for US-Turkey relations, ended Friday with an order to release him – a move that allows him to leave the country

A Turkish court ruled on Friday that the government will release American pastor Andrew Brunson from house arrest, sentencing him to three years in jail but saying he will not spend any more time in custody because of the time he has already served.

The court’s decision to lift judicial controls meant that evangelical pastor Brunson, at the heart of a diplomatic spat between the two countries, can leave Turkey and return to the United States.

Brunson’s arrest in 2016 sparked a diplomatic dispute between Turkey and the Trump administration, which had threatened new sanctions against the Erdogan government.

President Donald Trump tweeted – after international press reported the verdict – that he was ‘working very hard on Pastor Brunson!’

He later added in a second tweet: ‘My thoughts and prayers are with Pastor Brunson, and we hope to have him safely back home soon!’

The fourth hearing of the case against Brunson took place in a prison complex near the western Turkish city of Izmir.

President Donald Trump tweeted after international press reported Brunson’s release that he was ‘working very hard on Pastor Brunson, later adding his ‘thoughts and prayers’ for his safe return to the United States