Trump defends chaotic Syria pullout saying it was ‘no surprise’ – and warns ISIS if it hits the U.S. they are ‘doomed!’ – just hours after claiming the terrorists had already been defeated

Trump defends chaotic Syria pullout saying it was ‘no surprise’ – and warns ISIS if it hits the U.S. they are ‘doomed!’ – just hours after claiming the terrorists had already been defeated

President Donald Trump took to Twitter Thursday to defend his sudden announcement to pull U.S. troops out of Syria – and warned ISIS it was ‘doomed!’ if the terror group hit at the U.S.

Trump issued the warning just hours after proclaiming ‘we have defeated ISIS in Syria.’ He also said Russian, Iranian, and Turkish forces who remain would continue to battle ISIS. Despite the president’s claim the military assesses thousands of ISIS fighters remain.

In a barrage of tweets Trump also said the U.S. was getting ‘NOTHING’ out of being in Syria, where last year the president ordered air strikes to respond to President Bashar al-Assad’s use of chemical weapons.

The president’s pushback against critics comes after members of his own party blasted the sudden announcement he made Wednesday morning, disputed his claims that the U.S. had defeated ISIS, and warned regional powers Russia, Iran, and Turkey stood to gain at U.S. expense.

‘Getting out of Syria was no surprise. I’ve been campaigning on it for years, and six months ago, when I very publicly wanted to do it, I agreed to stay longer,’ Trump wrote. 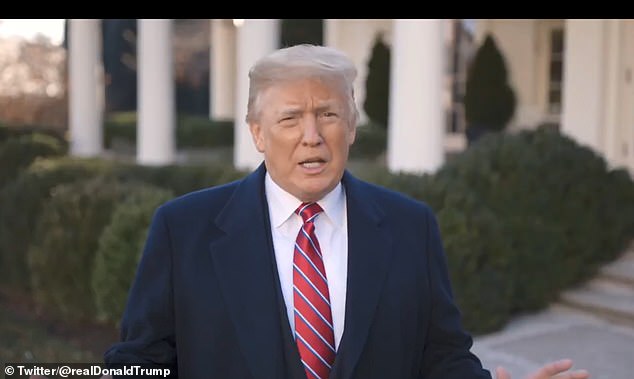 ‘Does the USA want to be the Policeman of the Middle East, getting NOTHING but spending precious lives and trillions of dollars protecting others who, in almost all cases, do not appreciate what we are doing?’ Trump asked while defending his Syria pullout Thursday