‘From a Turkish prison to the White House in 24 hours, that’s not bad’: Trump meets freed Christian pastor Andrew Brunson in the Oval Office, as President insists there was ‘NO DEAL’ mad ...

President Donald Trump has met with Andrew Brunson, the American pastor freed after nearly two years of detention in Turkey.

Brunson, 50, arrived in the Oval Office on Saturday afternoon after being freed from a Turkish prison on Friday and flying to Germany for a medical checkup at a U.S. military hospital.

‘From a Turkish prison to the White House in 24 hours, that’s not bad,’ Trump said as he introduced Brunson to the press.

Bruson thanked Trump and officials in his administration, as well as senators who had worked toward his release. The pastor then knelt and placed his hand on Trump’s shoulder to offer a blessing. 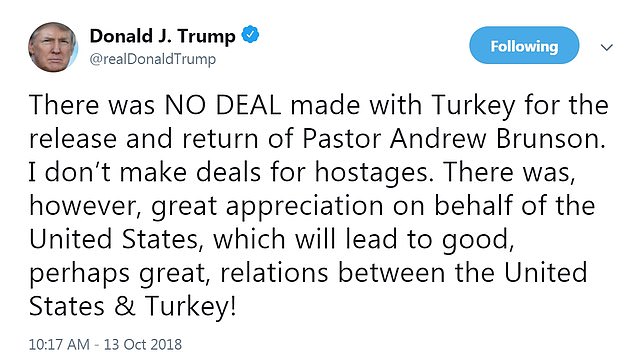