President Donald Trump said Thursday that Defense Secretary Jim Mattis will leave the administration in early 2019, but the onetime Marine Corps general is doing it on his own terms – listing the ways he’s incompatible with his commander-in-chief.

Chief among them is that Mattis believes Trump hasn’t tended the diplomatic garden of international alliances, leaving the United States unable to defend its interests overseas.

And the timing of his announcement was unmistakably linked to the president’s announcement Thursday of a troop pullout from Syria that the two men disagreed about.

‘Because you have the right to a Secretary of Defense whose views are better aligned with yours on these and other subjects,’ Mattis wrote after his litany, ‘I believe it is right for me to step down from my position.’

Trump treated the departure like any other in Washington’s revolving doors.

General Jim Mattis will be retiring, with distinction, at the end of February, after having served my Administration as Secretary of Defense for the past two years,’ he tweeted.

‘During Jim’s tenure, tremendous progress has been made, especially with respect to the purchase of new fighting equipment. General Mattis was a great help to me in getting allies and other countries to pay their share of military obligations. A new Secretary of Defense will be named shortly. I greatly thank Jim for his service!’ 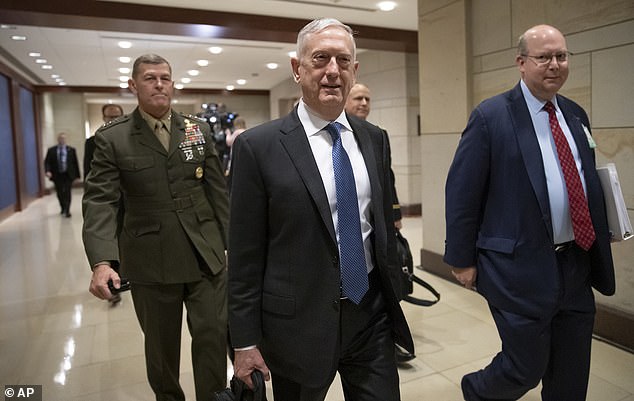 Farewell to arms? Defense Secretary Jim ‘Mad Dog’ Mattis, a former U.S. Marine Corps general, will step down from his post atop the Pentagon in February