Britain, Holland and US spearhead fightback against Putin’s cyber war as they reveal how Moscow’s web of hackers hit high-profile targets across the globe – including chemical weapons watchd ...

Britain, America and the Netherlands today launched a carefully coordinated fightback against Putin’s army of hackers as the scale of Russia’s global cyber warfare machine was laid bare.

First, the UK accused Russia’s GRU intelligence agency of being behind hacks on the World Anti-Doping Agency (Wada), transport systems in Ukraine and democratic elections, such as the 2016 US presidential race.

Then, Dutch authorities revealed they had caught a team of Kremlin agents rigging up computers, phones and an antenna in the boot of a car to try and hack into the global chemical weapons watchdog in The Hague.

This afternoon, the US Justice Department announced it has charged seven Russian military intelligence officers with hacking anti-doping agencies and other organizations.

The suspects, including the four members of the group caught in The Hague, are accused of hacking the records of 250 athletes from 30 countries as well as the computers of officials working in anti-doping organisation, for FIFA and staff at a US nuclear facility supplying power to Ukraine.

The Kremlin was left trying to hold back a growing flood of evidence of its hacking activities around the world, spread over four years. 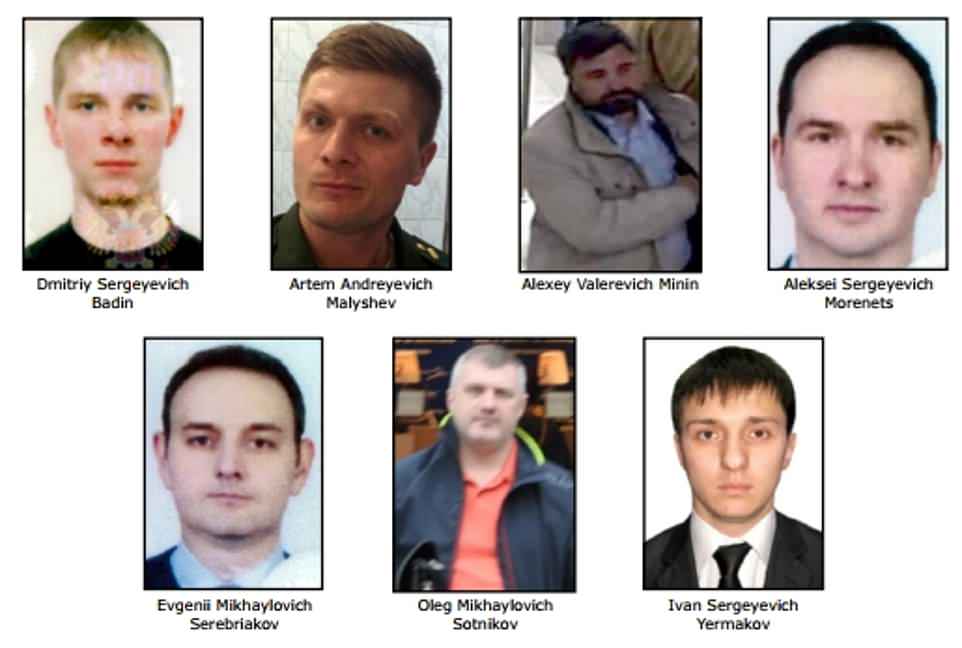 The US today charged seven Russian military intelligence officers over hacking attacks around the world. The group are accused of a range of attacks on institutions and individuals around the world. The attacks are linked to Russian attempts to spy on investigations into doping in sport, politics in the Ukraine and the US, and the poisoning of Sergei Skripal in the UK